One of the world's best-practice wildlife harvests

The wellbeing and survival of kangaroos is paramount to all Australians and to the future of the commercial industry.

Kangaroos are protected under The Environment Protection and Biodiversity Conservation Act 1999 (EPBC Act) and managed by state and territory governments. A range of national and state legislation is in place to conserve all species of kangaroos and wallabies (macropod) as well as the unique biodiversity of Australia.

The commercial harvest is one way some states control high populations of kangaroos in certain areas in a humane, sustainable and intelligent way that does not waste the meat or skins.

The KIAA recognises the important role the commercial kangaroo industry plays in helping to manage kangaroo populations and is committed to a best-practice sustainable harvest.

We have to manage kangaroo populations in Australia

Kangaroos are a very successful group of mammals whose breeding strategies have evolved to produce an abundance of offspring under ideal conditions. The primary drivers for the fluctuations in numbers are rainfall and drought. The larger kangaroo species have also benefited greatly from pastoral development, artifical watering holes and a lack of predators in Australia’s rangelands. As a result, an overabundance of kangaroos in the landscape can lead to overgrazing, which means grassy ecosystems no longer provide enough food and shelter for small animals such as reptiles insects, small mammals (including other kangaroo species) and ground feeding birds. This can cause mass starvation.

Harvesting kangaroos is one way of making sure populations do not exceed the carrying capacity of the land, which helps ensure the survival of all kangaroo species and preserves the unique biodiversity of the land. This responsible management of kangaroo populations for general conservation purposes is similar to other wildlife management programs undertaken around the world such as for deer in parts of Europe and North America.

Australia is a vast country, home to more than 40 million kangaroos. No threatened species of kangaroo or wallaby are allowed to be killed in the wild. The commercial industry is only permitted to harvest six abundant species of kangaroo and wallaby in sustainable numbers as determined by annual government quotas typically set between 10% and 15% of their populations.

Six of eight Australian states and territories permit commercial harvesting in areas with high kangaroo populations. Their governments must develop a kangaroo management plan that is approved by the Australian Government under the EPBC Act and takes into account factors such as the biology, population size, trends and conservation status of the species. The plan must detail the annual population monitoring and quota setting controls, the controls over the take, and must also demonstrate the harvest is not detrimental to the harvested species or their ecosystems. These plans are renewed every five years.

To ensure the commercial industry responds to changes in kangaroo numbers, state governments adjust quotas based on annual aerial and ground surveys and any events that force populations below a certain level. For example, two states reduced the kangaroo harvest quotas in November and December 2019 in response to drought, with one reducing the area of the permitted harvest zone. No adverse long-term impacts on kangaroo populations have been identified after more than 30 years of harvesting under commercial management plans. 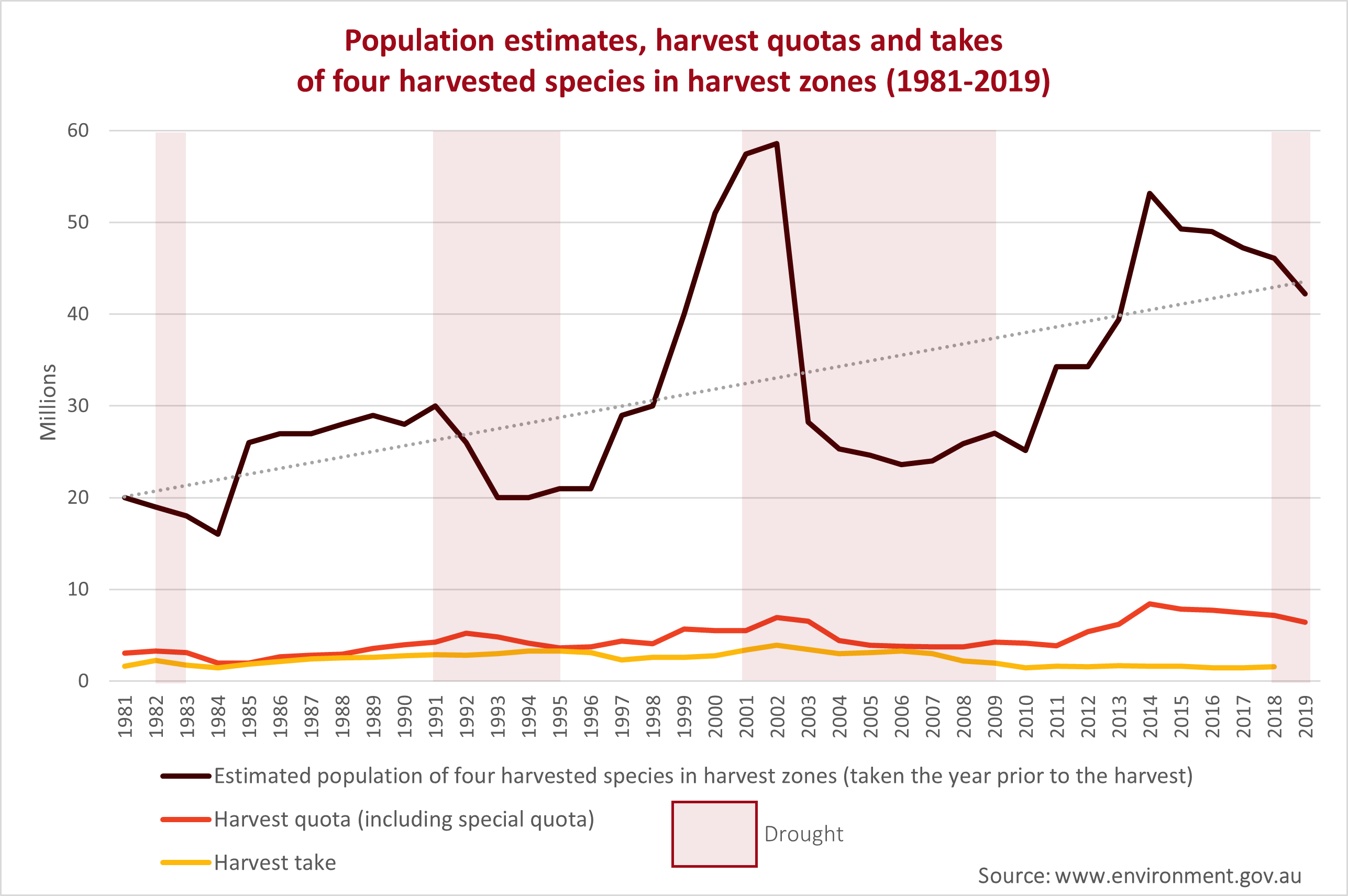 Culling would still occur without a commercial industry

Without a commercial harvest, population management measures would remain in place. This means kangaroos would still be kept at sustainable levels through government culling and non-commercial harvesting. For example, the Australian Capital Territory, where commercial harvesting is not permitted, undertakes a regular conservation cull of kangaroos to reduce the impacts of excessive kangaroo grazing. The absence of a commercial industry could also result in more unregulated and illegal shooting, which would result in poorer animal welfare outcomes.